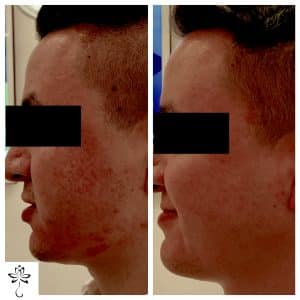 Long term cystic acne can result in both pigmentary and textural scarring.  While most pigmentary scarring will fade over time, textural scarring can be permanent. For many patients, the long term uneven appearance of the skin is just as distressing as the acne breakouts themselves.

Textural acne scarring occurs when inflammation recurs repeatedly in the same areas causing breakdown of the collagen and elastin in the skin.  Most commonly, textural scarring is atrophic or indented.  There are three types of atrophic scarring – ice pick, boxcar and rolling scars.

Fortunately, there are various resurfacing procedures available to improve the appearance of textural scarring in all skin types.  Skin resurfacing can be done with laser energy or manually with micro-needling.   The concept is similar – the scarring is broken down incrementally in microscopic columns which then stimulates the body’s natural healing response to regenerate the tissue in a more organized fashion.

Spring Street Dermatology offers fractional ablative resurfacing, and two types of non-ablative resurfacing to address textural acne scarring.   A treatment plan, using one or multiple modalities, is formed by taking into consideration patients’ goals, skin type and depth of scarring. The final step in the long battle with acne is to improve the leftover scarring – fortunately there are various effective procedures that can help!