When the Provider is the Patient: My Accutane Story, Part 1

When the Provider is the Patient: My Accutane Story, Part 1

For most of my adulthood, I had maintained what you might call a “clean cut” appearance. I was probably 16 years old when I received a free Gillette Mach 3 in the mail. Since then, every two days during my morning shower, I had dutifully shaved my thick red beard, never letting it grow beyond a respectable stubble. Last spring, however, approaching the end of my clinical year of PA school, I had had enough. Beards were in! I was 35 and late to the trend. Time to relax and give the early morning hacking a rest. I set aside my trusty Mach 3 and let my long repressed beard hairs come in. 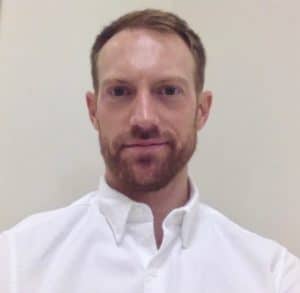 The response was immediately favorable. “Nice scruff!” and “Love the beard!” wrote friends on my Facebook and Instagram pages. Some friends were enthusiastic enough to write “Handsome!” or “Sexy!” In what felt like a human sexuality experiment, I felt an upswing of attention from both men and women. Did I look more rugged? More “manly”? More “masculine”? (Whatever that means?) Perhaps imbued with confidence in my new bearded self, I met my boyfriend Alejandro in early May. We have been happily partnered for almost nine months now. 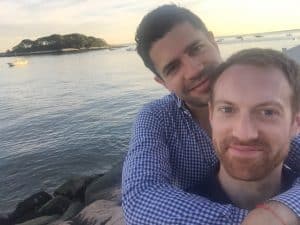 Lest you think this just another grow-a-beard-and-find-a-boyfriend tale, however, think again. As is so often the case in life, what goes up must come down—and my face as I knew it was about to go way down. By early July, powering through an Internal Medicine rotation at NewYork-Presbyterian Queens, I began to feel large, tender lumps underneath my beard. The hair was so thick, I couldn’t see the lumps, but trimming had become unusually painful. I also realized that my cheeks had become swollen, as if I had gained a significant amount of weight. (I hadn’t.) I kept the beard in place for my graduation on July 27, thinking I would shave a few days later and address what I thought would be some mild cystic acne that had formed under my beard. 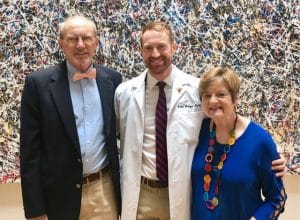 When I did shave for the first time in months, it was nothing short of a blood bath. Despite going slowly and carefully, I nicked a few of the cystic nodules with my razor. (This is where the faint of heart may want to skip ahead.) There was no purulent discharge or “pus” to speak of, but I was surprised by how much the lesions bled and oozed an oily yellow serous fluid. One in particular on my right cheek would not stop, but I had a dinner to run to. I grabbed some tissue and daubed at my face as discreetly as I could on my walk to the train. I managed to get through dinner, meeting some friends of Alejandro’s from Mexico and apologizing for the state of my face. It was the just the beginning of a new self-consciousness I had never experienced before. 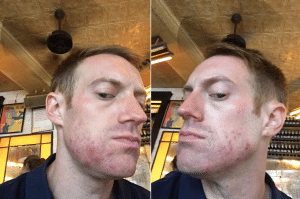 Two days later, I was diagnosed with impetigo, a highly contagious bacterial skin infection affecting the superficial skin. Impetigo most frequently affects children, ages two to five, but in adults it is often associated with poverty, crowding, poor hygiene, and underlying scabies.1 I was a poor PA student, and my beard had gotten pretty long—but was I that poor, and was my hygiene that bad? In any case, most cases of impetigo clear within one to two weeks, if treated. As I packed up for a long-awaited summer vacation with friends in northern Maine, I grabbed my prescription of doxycycline and clindamycin lotion with no doubt that I would respond.

As luck would have it, my impetigo and I were not “most cases.” Despite faithful adherence to the oral and topical antibiotic regimen, I got worse. The clindamycin lotion created a thick, dry, white cast over my cheeks, under which my cystic nodules poked through, bled, and oozed. The doxycycline, as far as I could tell, did nothing except make me more sensitive to the sun. My cheeks were still swollen, like a baseball player with a dipping problem. But I was enjoying myself, my friends, and the calm of Moosehead Lake. I decided there was nothing to be done until I got back to New York.