What Your Nails Say About Your Health

What Your Nails Say About Your Health 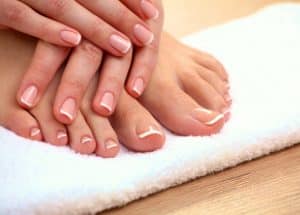 Our nails are made of a protein called keratin.  They consist of a nail plate, which is the part we see and paint with polish.  The skin under the nail plate is the nail bed and the skin around it is the nail fold.  A cuticle is thin tissue that covers the bottom of the nail to protect it as it grows from the root at proximal nail fold.  Nails grow approximately 2-3 mm per day and take around 6 months to completely regenerate.   Changes in the texture or coloring of the nails can provide clues to underlying health conditions. Spring Street Dermatology in New York City is a comprehensive medical, surgical, and phototherapy treatment center offering a variety of medical dermatology treatments, including treatments for the nail.

Nail textural abnormalities can be associated with underlying illness. Beau’s lines are indentations that appear horizontally across the nails when nail growth is temporarily interrupted by sickness or injury.  Pitting in the nails can be seen in psoriasis, eczema, and inflammatory arthritis.  Cracking or splitting has been linked to thyroid disease.   Digital clubbing occurs when the fingertips enlarge and the nails curve around.  This happens gradually, over years, and most often in patients with lung disease. Nails that curve out, called spoon nails, are linked to iron deficiency anemia.

The coloring of nails is also important.  Paleness in the nail bed may be sign of anemia.  Nails turning white may indicate liver disease whereas nails that turn half white are seen in kidney disease.  Yellow nail syndrome, where nails become yellow and thickened, occurs in chronic lung disease. Double white lines that run across the fingernails without causing dents can signify low levels of a protein called albumin, which can be seen in malnutrition.

Other reasons for nail texture and color change include trauma, infection, or malignancy.  Injury to the root of the nail, located behind the cuticle, can lead to permanent damage. Overzealous pushing or clipping of the cuticle can lead to nail injury but can also provide access for bacteria and fungi.  Bacterial infections present with tender swelling and possible drainage of pus along the nail fold. Nail fungus can cause the nails to be distorted, thickened, and discolored. Lastly, a dangerous type of skin cancer called nail unit melanoma often starts as a band of pigment running the length of the nail plate.  It is important to monitor these bands for changes such as widening, development of streaks, or extension of pigment to the proximal nail fold. Learn more about nail unit melanoma by visiting dermnetnz.org.

The moral of the story: Your nails provide valuable clues as to what is going on in your body.  If you notice a change, cover them up with polish and have them evaluated promptly in New York City!